That was little time to think about many things for me and for everyone.

However the million (Euro?) question was the following:

What is the plan?

What is the grand plan? Is there any?

Nobody really knows but I write this trying to put my thoughts and mental simulations in order. I believe I will fail but it would be interesting. Let’s calmly answer some questions. 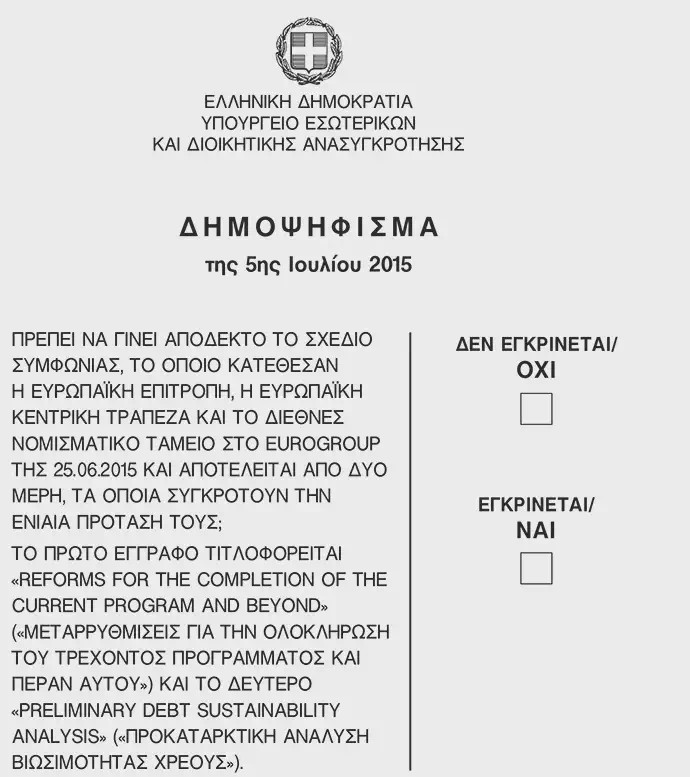 As the question was anything but clear, through the week we had many different scenarios for this.

What is the clearer message we can get from the result?

People and especially young ones (75% of them) voted No. At the same time75% of all people answered to polls that they wanted to stay in the Eurozone.

My interpretation is that this means out with the old and in with the new. Not just the old and the new of Greece but the old of Europe too.

At the same time people threw the ball back at Alexis Tsipras.

The result got me by surprise. No won by something more that 60/30 and in Athens there was a 70/30 ratio. We should examine why.

Yes was represented (maybe deliberately) in Greece by the people that run Greece after its big political reform in 1974 and in Europe by anyone who has been austere to Greece in the past 5 years. Also almost all private media were channeling people to vote Yes. That pretty much erased chances for aYes because Greek people hate all or some of the above categories.

However polls and even Twitter stats showed that people changed their minds at the last time.

People are angry with the situation. The last week helped to that. An hour a day in queue while in fear and uncertainty was an optimistic day plan. Angry people don’t choose positively.

At the same time the government strongly supported that there is no danger in choosing No. It seems like people believed them.

Nobody knows for sure. We still have to find out what we voted for.

The Prime Minister is ready to get again in negotiations and for the first time in these 5 months, Alexis Tsipras will make a move to form a united front for Greece with the help of the rest Greek leaders.

This could help Greece in the negotiations or if things go sideways Alexis Tsipras political cost would be highly reduced.

Many believe that this was the plan all along. That governing is too much for Syriza and they prefer to get back at the opposition where they feel comfortable and let the others take the blame of anything inevitable that will happen. It makes sense if you think how easy this gets with the referendum.

Now that we are here, let’s note that ex Prime Minister Antonis Samaras stepped down last night as a party leader meaning that the New Democracy party is going to get through (likely massive) reforms to become relevant and avoid the fate of Pasok.

At the same time Greece is divided. Many Syriza voters voted Yes because they feel betrayed by Syriza and many voters of other parties that were pro-Yes voted No. The thing is not party related and the word traitor gets thrown around a lot. People are afraid and uncertain. At least I am a little (less than last Friday I must say). This must be fixed really soon.

What can we do?

I am on a bus to Patras. A woman next to me is on the phone organising a play and her contact on the phone is anxious about what would happen. But the show must go on.

Be optimistic, hope for the best, continue our lives and search for ways to produce wealth in Greece. Armageddon is not coming and this will not be the end of everything. However things can still go bad or really bad but they can also go better.

Only time will tell…