Yesterday I realised that an acquaintance unfriended me on Facebook due to a certain political post I suppose.

I would lie if I said that his profile did not stood up on my feed. He is a very loud supporter of the Syriza government and I have read in the past many of his rage posts. I did not agree but I really evaluated them without being biased.

I don’t have any close ties to the guy. We met at a Startup Weekend, we share interest for certain technologies and comment on each others technical blogs from time to time.

But when I realised that I don’t see the raging posts anymore, for a moment I felt sad.

Then I read something from a friend: 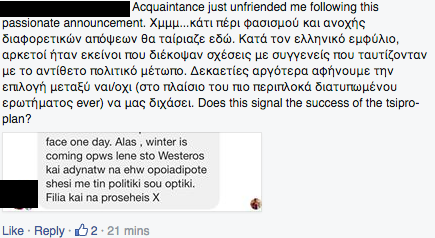 Same thing there and I suppose there are more examples out there.

So, Greek people are diminished to fiercely choosing sides. We are choosing sides on a question we don’t understand and we refuse to even see people with different opinions that may make us rethink ours. All this with 6 days in front of us and without an official statement on what the question will be or if there is a secret question to find between the lines.

Yeah, Facebook is not real life except when it is. People are putting opinions up there and evaluate other people opinions. So right now Facebook and Twitter, are the broadest means of conversation.

I know it is hard when you have been dragged around so much and I strongly believe that this choice should not have fallen on our backs.

However this is the situation now and until Sunday you better spend your time free of drama and dogma, getting as much opinions as possible and demand calm voices from people around you.

Just don’t think about your self and make the choice you believe is better for your children.

Whatever that is, if you really believe it, I am confident it is the right one.