Women contribute massively in all technological fields. They are an active part of the engineering community.

But they should contribute more.

Why they don’t? Because of numbers.

Just days ago Business Insider published it’s yearly showcase of the most powerful women engineers and as they say, it was hard to dig them out. Of course it was! The percentage of of women holding technical jobs in corporate America is abysmally small (about 15%) and in Europe things go lower. Just 6% of professional engineers are women in the UK (the lowest proportion in Europe).

That is actually very bad. In one of the most blooming places to be and women are not in here. And this is not about politically correctness. It’ s a shame.

Women are capable for engineering the same way men are and that means more capable people in an industry that really needs them.

We have to get their attention!

There are many dedicated initiatives to push women to become engineers.IEEE Women in engineering, Society of Women Engineers, dedicateduniversity programs and many more just a google search away. But why they fail so far?

An article puts the reasons in order:

These are mostly society perception issues.

However many women decide to follow scientific careers, but it is hard to keep them there. A study showed that 40% of women who got an engineering degree never used it professionally or when they did, they soon left. The reasons were mostly because they claimed that they had uncivil workplaces, supervisors didn’t support them and they also complained about male coworkers.

Many women are interested in engineering but they are being kept back.

Some companies try to change that. Not in the best way possible in my opinion but they try.

The trend is to show how easy it is for women to get involved with electronics by giving them ways to incorporate them in their clothes.

But when you mostly showcase that women want sew stuff with conductive thread and glue textiles everywhere, I believe you are kind of reducing them.

Hey, look how easy it is to do this. As easy as this other stuff you know how to do as a woman. Stitching, isn’t it?

I am talking mostly about Sparkfun and Adafruit which are two companies that I love. Adafruit’s CEO (Ladyada) is a woman by the way. 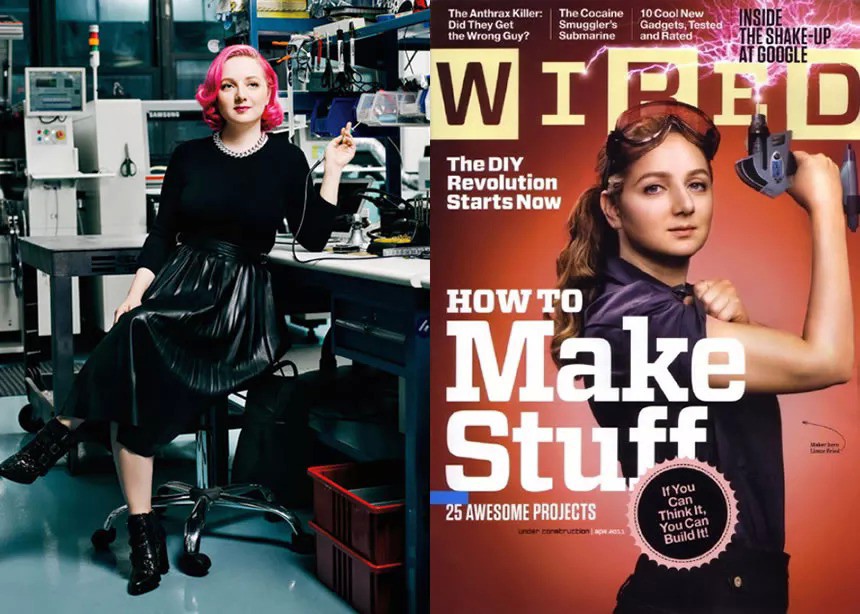 With the Arduino Flora there was a chance for women interested in the fashion industry to add sensors, buttons and lights to their clothes. This is awesome and broadening for the fashion enthusiast but this can’t be the end of it. There are many more interesting engineering stuff out there that are not “girly” and women may want to mess with.

Many women like to play with motors, high voltages or design rockets. Many of my friends are like that and they are good engineers. This looks more interesting and more inspiring to me. Women that have genuine interest for the technology and not just the final application.

What we should do instead?

Showcase the countless women that disrupt engineering every day, like Ladyada for whom we talked about or those who Business Insider found. That women are engineers of equal capacity to men and that we loose great possible engineers due to social idiocy. If you are a woman, don’t come and play with electronics because it is easy (it is not). Come because you love it and you are needed. Not as woman. As an individual!